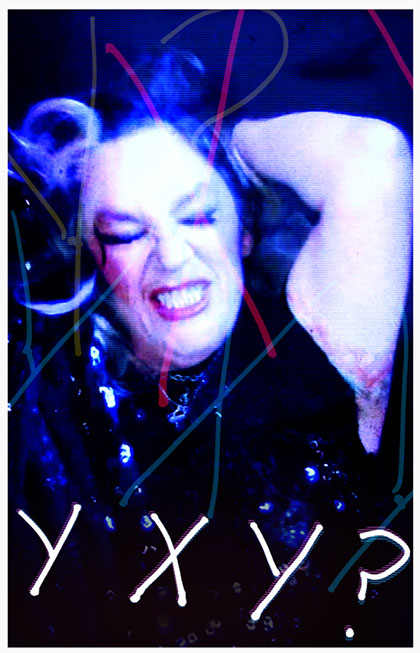 Uncle Alice and Jilly Idle have been collaborating on music on and off for decades. YXY? is

a song that Uncle wrote for the Door Mat series; Jilly did her interpretation of it in the style

of the music for the series, folk with a bit of down home country charm. It was sad and sweet, and very fitting for the movie and its characters. She also did a disco-inspired version that

we used in flashbacks.

Some years after the films, they got back together to remake the song, going back to it’s original roots… a rock-tinged punk anthem. And I think they did a brilliant job of it.

we also got together to shoot some setups of a music video for YXY?. We shot several scenes at Uncle’s parents’ house, at Jilly’s home, and outside Rosehill Cemetery.

As I started putting it together, I realized I could use some additional footage to pull it all together. When Uncle Alice came to visit Los Angeles, we dressed her up and had her lip sync.

I put the whole thing together and debuted it online in spring of 2017. Later that same year,

in November, we put together a retrospect show that we did at Martyr’s featuring bits from most of our projects, including the “YXY?” music video. It was a definite crowd pleaser.

And one of my proud moments, bringing a vision to Jilly and Uncle’s art.

I do love putting Uncle in a wig or two

Jilly Idle in a scene from the music video. Please note she is wearing an Uncle Alice t-shirt

I love this image... Uncle Alice ripping her wig off, the sparkles, the makeup, the tattoo... I just love how it all works together

A scene we shot in Jilly Idle's back yard. I think Jilly has a guitar pic in her mouth (I know, it looks like a carrot slice!)

When one Uncle Alice just won't do...

I love this shot of Uncle Alice and Jilly Idle. I see joy, I see the years of friendship and creating art together in one image.

A rare posed shot with the stars, after we finished shooting all of the footage. Or maybe we were just hanging out. Who knows?!