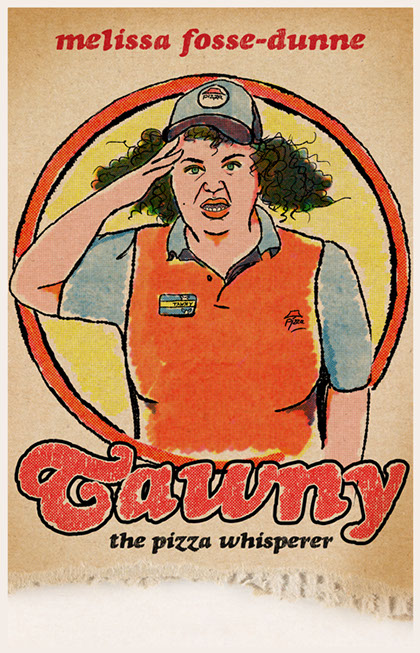 First off, I must give credit where credit is due. Tawny is completely the creation of Melissa Fosse Dunne. Period.

We spend a lot of time with Melissa; we enjoy weekend “gaycations” where we eat lots of food and watch a ton of movies and bad tv together. We pretty much spend the time laughing, and it is healing to the soul. Christmastime 2018, she had ordered three sets of “Perfect Smile” since the claims made by the commercial (wear them on interviews, dates, etc) seemed… dubious at best. We followed the instructions and each sported our set of horrible, tiny, very unrealistic teeth. You could barely talk without them falling out, and when you did, it sounded like you had a mouth full of marbles. We took lots of horrifying photos and laughed a lot.

In summer of 2019, Melissa was invited to submit an audition reel for the casting of the upcoming season of Saturday Night Live. It was to showcase original characters and celebrity impressions. Tony and I have helped her with auditions in the past, so we volunteered to do what we could. Celeb impressions would be Drew Barrymore (which she totally nailed), and teen superstar JoJo Siwa. She had a lot of ideas for characters she had been thinking about for a long time: Frank, a wise, 6-year-old with the mind and soul of a 55-year-old woman; Jenny Rose, the world’s oldest sophomore high school cheerleader; Cheryl, severe 1980s businesswoman; and then while she was sitting in her car waiting for us to come home one afternoon, she thought of Tawny, the Pizza Hut employee who was psychically tuned in to what everybody wants on their pizza. (I also contributed a character that I had been thinking about, Deb Patterson, a butch gal whose questionable fashion choices didn’t keep her from hosting a show all about fashion). While she was in her car, she ordered an employee hat and shirt. She popped in those “perfect smile” teeth and the ratted out wig that Uncle Alice had worn in Graham Crackers with a clip-in extension, and Tawny was born.

For Tawny, we shot her footage interview-style in front of the Pizza Hut closest to our house, one of the few remaining old-school eat-in Pizza Huts around. She talked about her “gifts” - being able to predict what someone would want on their pizza, and also being able to tell the destination of any plane she spotted in flight. As the Pizza Hut was right next to a very busy gas station, we had to contend with loud traffic, including a car pulling in to fill up blasting gangsta rap music at a deafening level. So Melissa made the most of the situation and just started improvising a dance in the middle of the parking lot. We ended with her running up to work, into the building. We loved the footage we got; we thought it was hilarious and I loved how she just rolled with the situation and improvised.

As it turned out, a mere few days later, that same Pizza Hut took down all of their signage and locked the building. We happened to shoot there on one of it’s final days in business. Which gave us an idea… what if Tawny returned to work and found the business gone? We went back and shot, with Melissa improvising Tawny’s plight. And we decided to turn Tawny into a series of shorts, since fate had provided us with a story arc that we never anticipated. We made 11 Tawny shorts in all, dealing with her loss of job, and her buoyant hopefulness in the healing power of pizza (she stood out on the side of the road in the dusty desert town of Pearblossom on the way to Vegas holding a sign that said “Honk if you love pizza”). We even did an episode enlisting cameos from Tony, me, Melissa as Deb Patterson and Uncle Alice as Doreena from Door Mat.

Tony and I helped with suggestions along the way, we all came up with situations to put Tawny in, and then we filmed on an iPhone and I edited the pieces in Adobe Premiere. We posted one each week on Melissa’s YouTube channel. Tawny’s journey proved to be funny and unexpectedly kind of touching. And man, what a blast to do. Tawny turned our weekends into days of laughing til we cried. SNL didn’t end up casting Melissa, but their loss is our gain. We saw just how creative she can be, and together we made some funny shit. And the hope is to bring Tawny back for another round of videos in the near future.

As Tawny would say… PIZZA!

Click on thumbnails below to start slideshow of images from the video series!

Tawny selfie in the car

Action shot from the first day of shooting where Tawny actually runs into the real Pizza Hut, guerilla filmmaking style

RIP Pizza Hut... our location being dismantled shortly after we shot the first short in the parking lot

The “Honk If You Love Pizza” campaign started at the end of our street...

... eventually leading to the desert near Pearblossom, CA

We went to a Christmas tree farm near our house to film some shots, then I ran into Alfonso Ribeiro (who I had just done a photo shoot with) and things got weird

Tony and Tawny, at the second Christmas tree farm we went to

We ended with the special holiday episode “The Bite Before Christmas,” which was written by Tony

HONK IF YOU LOVE PIZZA

THE BITE BEFORE CHRISTMAS