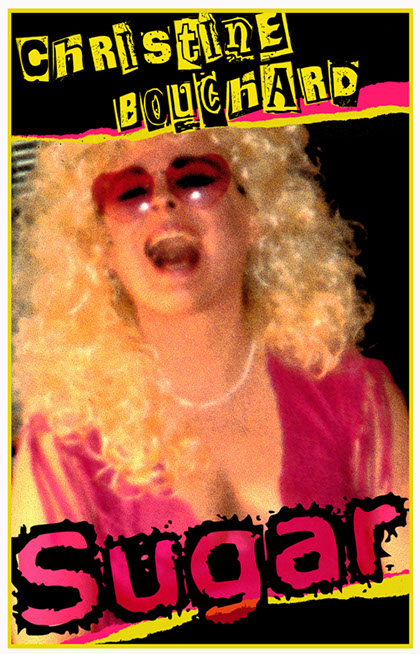 A mockumentary about a faded rock star, SUGAR was to finally be a starring, name-above-the-title role for Chris Bouchard. She had done so many supporting roles over the years, and remains a fan favorite, so it seemed it was time to give her the spotlight. She would play the titular star Sugar… washed up, down but not out.

We shot footage of her from the different phases of Sugar’s career, from 60s starlet terrorized in the film-with-a-film The Crawling Ear, to slightly long-in-the-tooth “teenager” in Roller Disco Boogie Fever, to her sad commercial for Uncle Kreemy’s Donuts. Chris delivered, and many of our other stars stepped into roles very different from what they had done previously.

Carrie D’Waay played an older lady who had known Sugar in her youth back in Boca (and was not impressed); my sister Linda played Sugar’s disco-hating mother in Roller Disco Boogie Fever; JoWanna Wacker (aka my long-time friend Yvette) played both Sugar’s former hairdresser plus a male role as a former lover; and my friend Mary Karlson did a turn as a former agent and knocked it out of the park as Sugar’s superfan.

This was another project that was marred by poor sound from my malfunctioning camera. It was also one that we went into without a complete script… ultimately it just dropped off my radar, though I do love the footage that remains. Everyone was at the top of their game.

We showed some of the scenes at the “Framed” show at High Risk Gallery in 2001. I ultimately used a lot of the footage that we shot for “The Crawling Ear” sequence in the first DOOR MAT film ten years later. It made me happy that I could get Chris into the project, even if it was just by using older footage.

SUGAR would be the last project we worked on for a decade, and the last one to use actual Super-8 film.

SUGAR at her sultry best...

“The Crawling Ear,” a movie-within-a-movie. This footage was ultimately used in DOOR MAT: MOVIN’ ON IN

Sugar is terrorized by The Crawling Ear

I do love this photo from “The Crawling Ear” segment

Me lying on the ground filming “The Crawling Ear.” I’m 99% certain I was unaware I was lying in dog shit at the moment.

“Yeah, I am sick. I’ve got the worst case of Roller Disco Boogie Fever... man!”

Linda Larson, as the mom in “Roller Disco Boogie Fever,” proving why people should always have eyebrows

I’m not sure what happened to the rest of this photo, but it was too beautiful not to share.

Carrie D’Waay as the woman who grew up with Sugar back in the hood... and was not impressed with how she turned out.

JoWanna Wacker as Sugar’s former hairdresser, who knows all the secrets. This was after I replaced her in Meter Girls... see, we remained friends!

Mary Karlson in one of her two roles in the film, this time as Sugar’s former agent

JoWanna Wacker as the man who was Sugar’s former lover... and remembers her fondly.

A low point in Sugar’s career... hawking Uncle Kreemy Donuts in a commercial. “The only ones that SQUIRT when you bite ’em!”