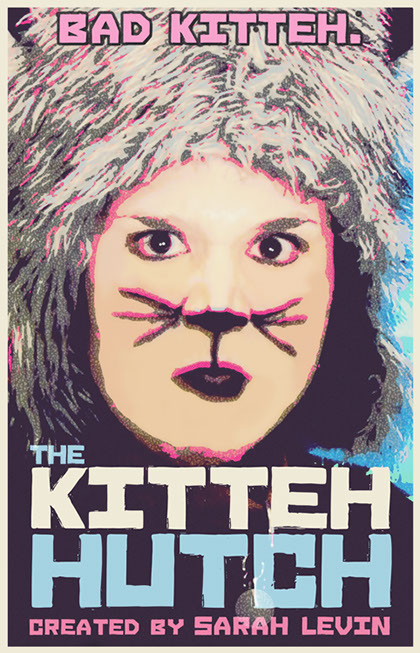 Sarah Levin is a friend whom we’ve known for a long time… she is an actor, writer, singer (she sang and played guitar at our wedding in 2014); She asked me if I would direct a short film project she had written called THE KITTEH HUTCH. Anyone who knows me also know that I rarely say no to my friends.

It concerns a kitty named Mabel (played by Sarah) who recounts the trespasses against her and plots her revenge throughout. Her enemies range from the squirrel that taunts her and to her human, Dave.

The digital film is very different from my own projects, but my goal was to bring a little visual style to accompany Sarah’s dialogue. The end result is a dream-like confection of purples and softness against the almost Shakesperean text. Tony edited the film (and appeared in a cameo as the human).

It was strange to only be involved in the directing and shooting, but fun to be able to focus and not wear as many hats for once. All in all, this is 100% Sarah’s creation and I just helped bring it to life.

The film played a couple of festivals; we went to the premiere at the Mockfest film festival at Raleigh Studios in Hollywood (it was so cool to be at that very historic Hollywood studio, and to be watching something that we had created in their Chaplin screening room!) and the Dyke Delicious film fest at Chicago Filmmakers.

Click on thumbnails below to start slideshow of images from the short video production!

Mabel (Sarah Levin) looking out from THE KITTEH HUTCH

Mabel has many theories about many things

Dave (Tony Pinizzotto) pets Mabel. What gives him the right?!

I mean... for a kid who dreamed of going to Hollywood to make films... this was pretty dang cool

Creator Sarah Levin on the red carpet at MockFest in Hollywood

Tony, Sarah and I on the red carpet at the MockFest premiere

Me with Nan Owens at the MockFest premiere at Raleigh Studios

It was an afternoon premiere and extremely sunny... don’t judge me for squinting!