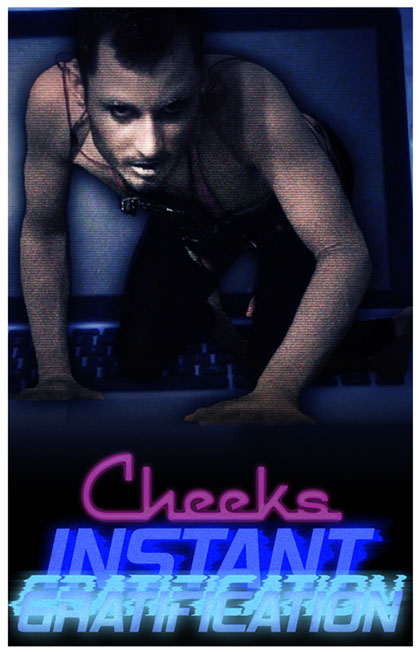 In 2008 I met a young man who went by the stage name of Cheeks to talk to him about playing the female role of Xoie in one of the DOOR MAT films. He was immediately a colorful personality and a force of nature. In addition to acting, he also had an EP of music out and was in the process of recording his second EP entitled “Glambition.” We shot the Door Mat films in early 2009, and then later in the year Cheeks reached out to ask if I would collaborate on a music video with him for the song “Instant Gratification.”

We met up and went over ideas; honestly, they were mostly his. I provided the location (our house) and some ideas for individual shots, and then I shot all of the footage. He definitely had a lot of specifics in mind and I was happy to help him realize his vision.

We shot everything in one day at the beginning of 2010; he had three makeup changes, we did a TON of shots in front of our makeshift green screen (a green wall in our living room, with a green tablecloth on the floor). It was a long, laborious day, but I loved so much of what we got out of it. At the end of shooting, Cheeks mentioned some of the FX he would like me to do… it wasn’t my forte at all, but I was game. Then he told me he would like to premiere the video online in a week. “Not happening,” I replied. Not only was I learning my way through the effects (including keying out green screen footage, which I had never done plus it wasn't the best green screen to key from), but I was working full time at a job where I had to be at the office at 2:30 in the morning. My schedule was crazy to say the least.

I don’t remember how long it took me to do the FX shots he asked about - maybe a couple of weeks, but I delivered them and the footage to him as he was going to edit the video himself. A few days later, he put the edited video online… and I was not happy. At all. There were a lot of problems with it, but it seemed obvious to me it needed a LOT more work, a lot more effects shots, and a serious re-editing. I detailed everything in a not-so-subtle and probably not-so-nice email to him. He was very nice about it, and encouraged me to rework things to my vision of how it should be.

A fire was lit under me, and I worked every waking hour on all sorts of effects, and then edited everything together myself. I sent him the revised, he pulled the old video down and replaced it with the “Director’s Cut” (I don’t recall being credited as the director, but oh well). I was much more pleased with the final product; hopefully Cheeks was too. The final product definitely wasn’t instant, but I loved it and was so proud to be part of it.

A shot from early in the video, with Cheeks looking especially haunted

I superimposed the closeup of his eyes onto our round tv... please note, the stand is a metal dog dish on a stack of VHS tapes!

Eagle mask... I don't know, it was Cheeks' concept. But the filming and lighting here, all me.

This shot reminds me of Blue Velvet. The video isn't as homoerotic as this would make it seem. Or maybe it is.

I love, love, love how this came out! Lights, filters, FX and performance all came together perfectly.

Ok... maybe it IS as homoerotic as it looks.

But look at that beautiful face.

Crawling out of the laptop... all FX

I don't know. I had to fill in with some footage. So I made this.

The martini shot of the piece - drinking gasoline

Behind-the-scenes shot showing just how professional and glamorous it is... I'm holding up a worklight while I film.

The pose is not what it looks like, but it is one of the few BTS shots I have that shows our setup

Our green screen setup... a green painted wall, a green plastic tablecloth on the floor, two ladders holding clip-on lights with tracing paper filters, and my little HD camera on the tripod I have been using since the 80s!

Another look at our “studio” setup