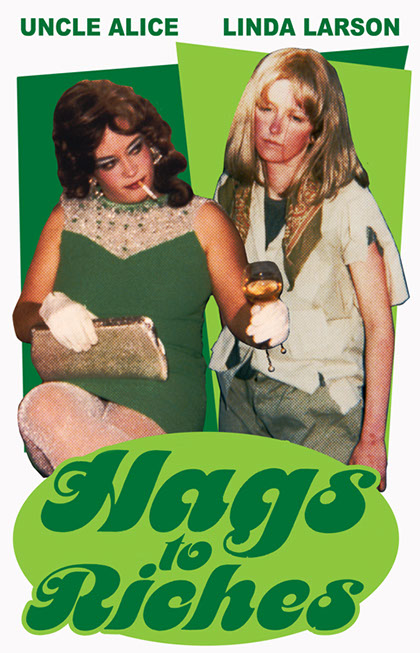 The intended follow up to HOUSE OF SIN, this film was going to be even crazier and campier. The premise was about a white trash woman who ends up inheriting all the riches from her wealthy employer who is declared dead after a plane crash. But the woman returns seven years later and wants everything returned to her. She ends up trying to claw her way back up from nothing…

Once again, I had a partial script (with some very controversial scenes that some of the actors were sketchy about doing)… so of course we just started filming, ending to be determined later.

Uncle Alice played Naomi, the newly wealthy former maid, plus had a second role as Naomi’s rascally ex husband Emmet. My sister Linda played the very pretentious Constance Barrington Carlysle the third. She wore a blonde page boy wig and actually got to look very pretty in the scenes we shot. Christine Bouchard outdid herself as Naomi’s crotchety mother, who reappears to claim her “piece of the action.” Gina Cappuccino was in college at the time and was more challenged with free time, so we shot her scene as a reporter in one short afternoon. And newcomers to the cast included Uncle Alice’s best friend Cecilia (who also did her fantastic transformation into the rich Naomi) and another college schoolmate of Linda’s named Kat as Constance’s mentally challenged daughter who winds up as Naomi’s maid.

While I was working out the plot details and the more controversial elements of the movie, my mom passed away from cancer. We stopped shooting and never returned to the project.

I ended up putting some clips into a reel of outtakes I did for a retrospect show some years later… some really funny moments. Especially the sex scene with Uncle Alice as Emmet and Linda as Constance. They did the scene and then were appalled and didn’t really want to share it with the world.

So HAGS TO RICHES remains one of my great, unfinished projects.

Click on thumbnails below to start slideshow of images from the unfinished film!

Uncle Alice as Naomi. When we resurrected the character a dozen years later for METER GIRLS, Uncle Alice wore the same wig. The elastic in it was long gone.

Constance Barrington Carlysle III (Linda Larson) makes her way back from being lost at sea for seven years to find her fortune is gone... to her former maid

Brenda King (Gina Cappuccino)... this is her same wig from HOUSE OF SIN

Naomi’s mother (Christine Bouchard) shows up for a visit

Heart to heart with Noami and her Momma

Constance is confronted on live TV. She is not happy.

“Ooooooh, pubic hair!” - so much inappropriate dialogue. But so much fun.

Cecilia Hunt is Naomi’s best friend. I think her character name was Cecilia... How fab is she?

Constance goes to get her lights fixed... and winds up with more than she bargained for when she encounter Emmet

Linda Larson and Uncle Alice are all smiles behind the scenes.