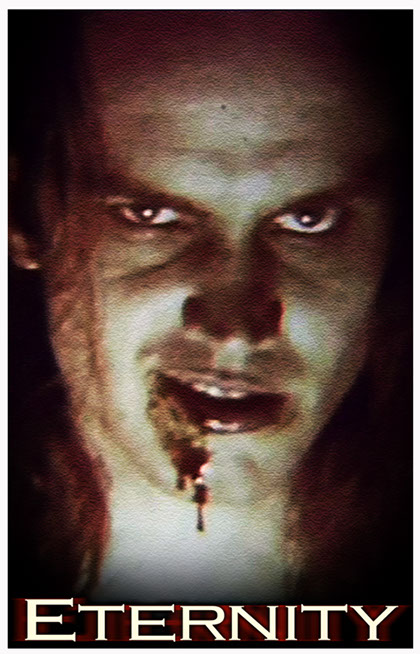 I had what seemed like a great idea… a vampire movie which played upon so many things in my actual life, with my regular cast playing it not for laughs but for thrills and chills. Faith Darling, Gina Cappuccino and Carrie D’Waay were all on board. I drew from my personal experience of a tragically dramatic situation (unrequited love) that I blew completely out of proportion, thinly veiled of course. Unfortunately (or perhaps not), I had trouble fleshing out the story and script and never ending up getting terribly far with the project.

Steve Key, who had a bit part in GRAHAM CRACKERS as the bartender who has to physically throw Linda out of the bar, was cast as the lead. He had been a college classmate of Carrie D’Waay who started with a more casual interest in acting but moved into plays and ended up being a successful working actor on stage in New York, Chicago and the world as well as appearing in movies and television shows. He had a great look with long dark hair in a ponytail that I thought would be perfect. We shot some test footage in Graceland Cemetery in Chicago, and at the rocks along the lakefront at dawn with the sun rising dramatically. I was thrilled with the footage, but could not figure out where I wanted the story to go.

So ETERNITY remains one of my started but never finished films… I put together a trailer with some of the footage, but even that is something I don’t show as part of my repertoire.

Click on thumbnails below to start slideshow of images from the unfinished film!

Handsome Steve Key watching the sun rise at the lakefront

Steve, menacing and moody. I still love this image.

And then he took it to extra creepy with his half-smile.