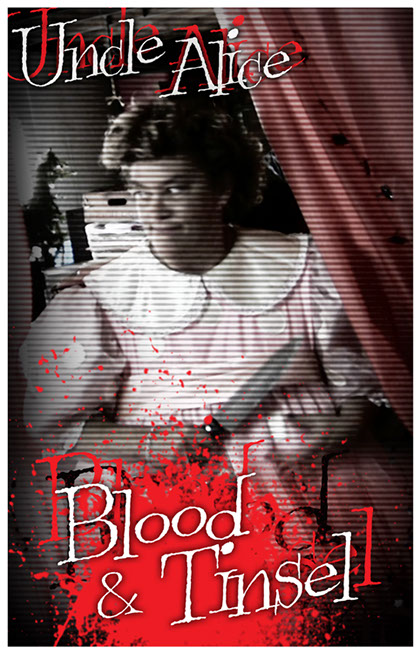 Uncle Alice and Jilly Idle got together to create a song to be featured in NUT CRACKER N25. It is a creepy, bizarre song about Christmastime and murder… when I heard it, although I liked it, I didn’t think it would really fit into the movie. I suggested we make a stand-alone music video.

We shot the film of N25 in April of 2015… but there were a couple of scenes I wanted to do as wraparounds to bookend the story in the film. So I flew to Chicago in September of 2015 with my little HD video camcorder; my longtime star Christine Bouchard and her husband Al graciously offered to let me shoot the scenes in their gorgeous midcentury home. Jerry Nunn played Chris’ brother… since the scenes were short, it didn’t take a terribly long time to shoot, so I figured we could shoot the music video while we had the house set up for Christmas in September.

It involved Uncle Alice in a polka dot dress that looked like a stylized Shirley Temple outfit via a 1960s TV variety special. I bought it as a place that sells old Hollywood wardrobe, so it may have actually been in a TV special at some point! She was bizarre and menacing as she lip synced the song over and over for different angles. Chris, Al and Jilly were all bemused if a little disconcerted.

We shot a couple of additional scenes at UA’s parent’s house, and then I zipped back to Los Angeles and began editing. I like to think I created something that matches the uneasy bizarreness of the song, step for step.

This video also premiered online in December of 2015, debuted on the big screen at Martyr's in Chicago that same month as part of their “Louder than a Mom” show. It was also featured as part of a larger retrospect show at Martyr’s in November 2017.

Incredible house we shot at

At the corner of creepy and disturbing...

I do love a good Christmas light barbed wire

Everybody take your medicine now

Uh oh, this can’t be good

Pretty as a poinsettia

Filming with my little tiny camcorder.